There Is a Green Hill Far Away

Hereby perceive we the love of God, because he laid down his life for us… 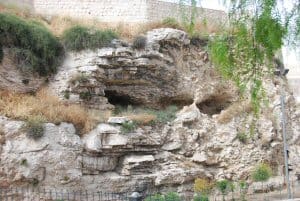 The evocative words to this hymn painted a mental picture for me as a child, bringing the scene of our Savior’s crucifixion to life in my imagination. Though I am sure my imaginings were far short of reality, the hymn is still as compelling to me as an adult. The author wrote them for children, so it’s no wonder I loved them early. They’re so beautiful, it’s no wonder they’ve remained favorites into adulthood.

This new melody is another one that tugged at me for more than a decade before I finally got around to writing it down. The lyrics for verse three have been altered slightly, since I used it as a bridge and needed a few more syllables. The phrase “without a city wall” is sometimes rendered “outside a city wall”–“without” being a synonym for “outside” in this case. I chose to use “without” because that’s the way I’ve always sung it.

Using violin with a soprano voice (as in the recording) will be tricky in live performance. In a recording you can duck the violin under the voice so it doesn’t fight for attention quite so much. In a live setting, you’ll have to pay careful attention to balance if you’re singing in the treble range.

We may not know, we cannot tell
What pains He had to bear
But we believe it was for us
He hung and suffered there

Oh, dearly, dearly has He loved
And we must love Him too
And trust in His redeeming blood
And try His works to do